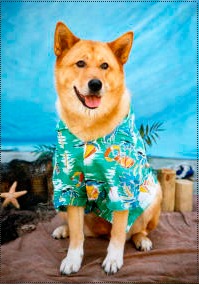 GILROY -- Heartbroken by the senseless, slow death of his canine pal, Michael McVey hopes that a surveillance photo might help find those responsible for leaving a kindhearted dog to wither for days in the back of a stolen SUV.

The tragedy began on Feb. 23, when McVey's Nissan Pathfinder was stolen from the Gilroy Walmart parking lot with his longtime pet Keiko, a 15-year-old Akita, in the back seat.

"She was a great companion, I took her everywhere," said McVey, 56, who is unmarried and has no kids. "It never was a problem -- she would just wait in the car for me to come back. She probably didn't understand what was going on."

After calling police and searching the parking lot to no avail, he spent the following days agonizing over what happened to Keiko. He found out last Thursday morning when San Jose police called and delivered the news: His SUV was found at a San Jose Walmart. Keiko was still inside.

"She didn't survive after four days without food or water," McVey said. "I'm pretty disgusted -- it's horrible that they did that, just left her there like that and walked away. I want to see them brought to justice.

"What they did was beyond wrong. It takes a sick kind of person to treat a living creature like that."

Sitting in his San Martin trailer on Tuesday, McVey flipped pages in an old photo album, showing pictures of his dog at play and posed in a loud Hawaiian shirt. Keiko loved the beach, he said, and often accompanied him on his surfing trips to Baja California.

"He loved his dog so much it was to the point where I thought he was weird," said his friend Josh Harris, 25, whose family owns the property where McVey has lived for more than eight years. "I thought there was something off about this guy -- who loves a dog that much?"

Harris said that after getting to know McVey, he realized that Keiko truly was his best bud.

"He'd go make a T-bone steak for her," Harris said, "then pop a frozen dinner in the microwave for himself."

Gilroy police released a photo from a surveillance tape taken at Walmart that shows the two people who stole McVey's vehicle.

"At this point, they are persons of interest in the vehicle theft," said Gilroy police Sgt. Pedro Espinoza. "But they are probably responsible in one way or another for the dog as well."

Espinoza said based on the video, one of the men is about 5-foot-6 to 5-foot-8, with average build and a goatee. His accomplice is taller, 6 feet to 6-foot-2, with a thin build.

"Hopefully, once we put this out to the public someone will say, 'Hey, that looks like so-and-so,' and we'll go from there," Espinoza said.

By accepting you will be accessing a service provided by a third-party external to https://gilroypoa.com/